All Good Things Must Come to an End... 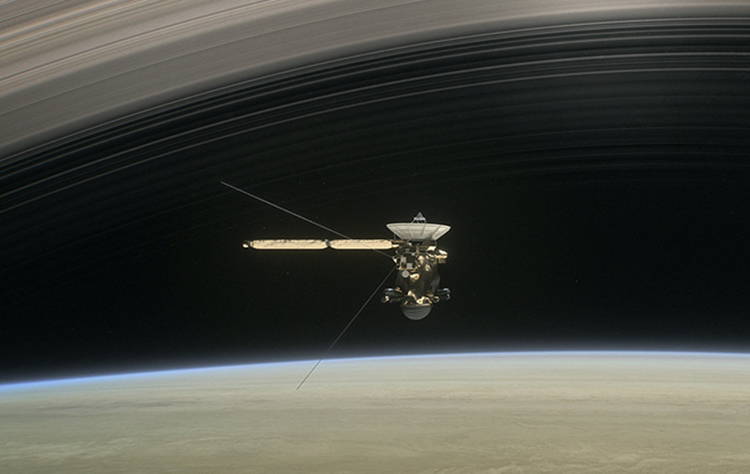 This Friday, September 15, 2017, the long and successful Cassini-Huygens mission to Saturn and its moons will come to and end when the spacecraft plunges into Saturn’s cloud tops. NASA is doing this because the aged spacecraft has nearly exhausted its manuevering thruster fuel stores, and they don’t want to risk Cassini crashing into Enceladus and contaminating that possible crucible of life with Earth-germs, or the 73 lbs (33 kg) of Plutonium in the spacecraft’s power generator. Let’s highlight some of the mission’s biggest discoveries and look at how to use Starry Night to fly with the spacecraft throughout its 20-year journey. You’ll see what Cassini saw, from launch, through gravitational assist planetary flybys and Saturn moon encounters, to the End of Mission (EOM) - and how you can see when the last signals from the mission arrive at Earth.

Take it to the Next Level with Starry Night

A highly interactive version of this lesson plan with additional features is available for users of Starry Night software. To find this content in Starry Night open the SkyGuide pane and click on the Teachable Moments or Learning Moments icon depending on which version of the software you own. If you do not own Starry Night, you can still use this document to learn more about the historic Cassini mission.

Starry Night is available for desktop computers, Chromebook, and mobile devices. Educational versions are available that teach all your Astronomy and Space Science topics by combining interactive software exercises, hands-on activities and thought- provoking discussion questions. You’ll be amazed at how quickly your students grasp the fundamentals of astronomy.

The Cassini spacecraft arrived at Saturn with a detachable probe called Huygens that revealed some major surprises early in the mission. Huygens descended on a parachute through the thick opaque atmosphere and made a soft landing on Saturn’s largest moon Titan. 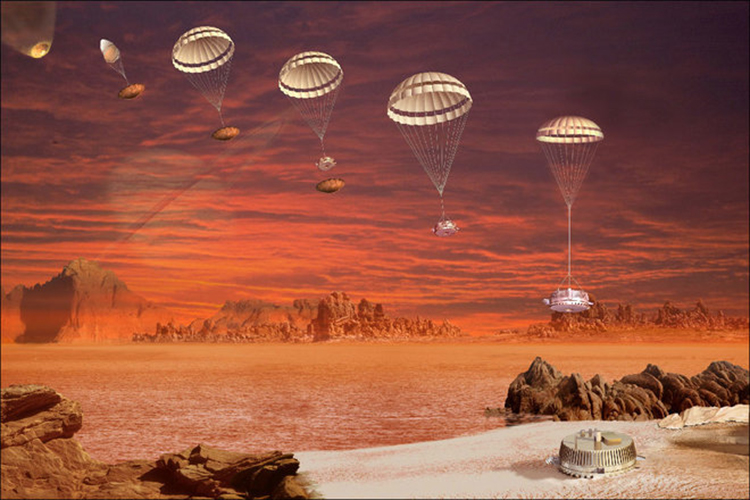 There, we discovered that Titan, larger than the planet Mercury, has very Earth-like terrain. Huygens beamed back pictures of mountains and valleys cut by widespread river drainage systems that flowed into lakes and seas. In this case, however, the liquid flowing on the surface is composed of hydrocarbons like methane. Much later, scans with Cassini’s radar instrument during close flybys mapped the terrain globally, discovering dune-like structures found on Earth, methane rainstorms, clouds forming and flowing across the landscape, and more.

The repeated close inspections of Saturn’s moons revealed each of them to be fascinating worlds on their own. Dark Phoebe is a captured asteroid that sheds dust that accumulates on the leading face of another moon named Iapetus.

The outer part of the Moon’s shadow, where only some of the Sun’s light is blocked is known as the penumbra. Observers on the Earth in the penumbra shadow will see a partial solar eclipse. 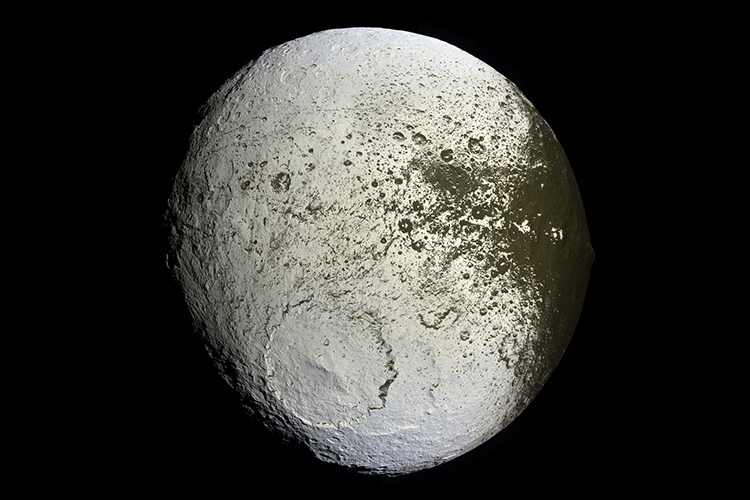 Tiny Enceladus was discovered to be continuously spewing water ice from a warm spot on its south polar region. That ice was feeding material into Saturn’s outer F-ring. 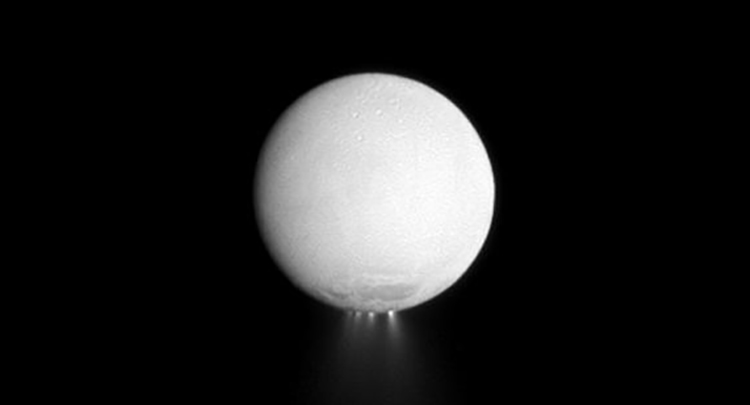 And gravity and magnetic field measurements indicate that Enceladus and Titan have liquid saltwater oceans beneath their icy exteriors – possible crucibles for life. Dione was found to have a very tenuous atmosphere. 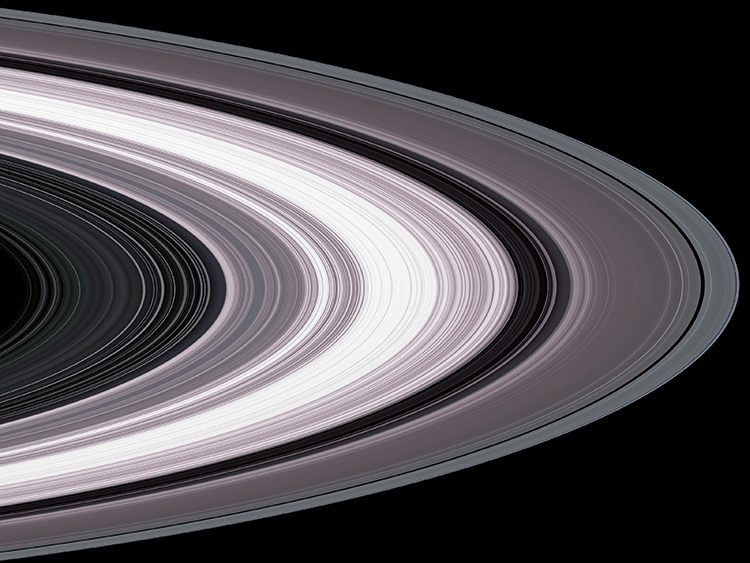 Flying along with Cassini

Starry Night is a terrific tool for accompanying Cassini on its journey, for viewing the space around it, and exploring Saturn during the various scientific study phases. To share the experience with a group, connect to a large display and enjoy the beautiful graphical renderings together. And you can preview the entire mission now, follow along in real time on Friday, or replay it later. You can use the Cassini/Huygens section of SkyGuide under Space Missions or play the mission path simulation by searching for “Cassini”. 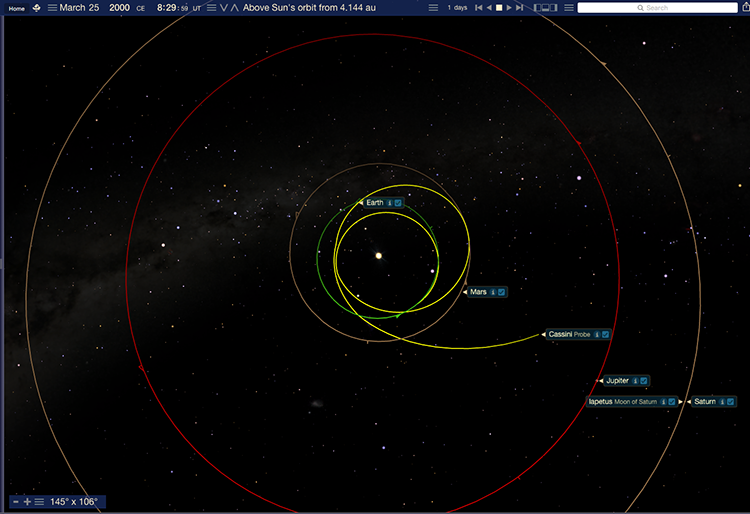 
In mid-September, 2017, the program will show that the spacecraft is at Saturn in the constellation of Ophiuchus, but that wasn’t always the case. You can replay the launch from Cape Canaveral, Florida on October 15, 1997 all the way to now. In order to gain enough velocity to reach Saturn, Cassini performed a series of gravitational-assist flybys, and you can replay them in the app, too by selecting Cassini in the search results window and then using Set Time to Mission Event to see launch, Venus flybys, the Earth and Jupiter flybys, and orbital insertion at Saturn.

On July 1, 2004, Cassini entered orbit around Saturn. Let the program run past that date and watch as the science orbits approach and recede from Saturn over the next years. At first the orbits are longer, with larger apoapses (the maximum distances from the planet). Later the orbits are shorter and closer. During some periods, the spacecraft stays in the ring and moon orbits plane. At other times it rises out of it. Quick links for the various mission phases are available under the Mission Path Segments menu.

With the primary mission objectives more than complete, it was decided to perform some riskier moves with Cassini before the end of mission. Between November 30, 2016 and April 22, 2016 Cassini was commanded to perform a series of ring-grazing orbits that carried the spacecraft over the planet’s poles every seven days. Starting on April 26, 2017, Cassini was sent diving between the planet and the rings in order to measure the mass of the rings for the first time.

To see Cassini’s final bow, set the program to September 8, 2017. In the next section, I’ll run through the timeline for the end of mission. You can follow along in the software.

The final trajectory of Cassini will have it swing upwards from beyond Saturn and then descend towards the planet from above while moving approximately in the direction of Earth. This will allow for direct signal transmissions and ensure that the spacecraft enters Saturn’s atmosphere on the side facing Earth. To prolong the spacecraft’s health while in Saturn’s upper atmosphere and allow it to record and transmit data as long as possible, the final dive will occur at a very shallow angle, but steep enough to avoid the risk of Cassini skipping off the cloud tops. According to JPL’s Cassini Grand Finale webpage, the end of the spacecraft’s mission will go as follows:

You can monitor the Deep Space Network’s communications with Cassini on your PC or your mobile device by navigating to https://eyes.nasa.gov/dsn/dsn.html. Here you’ll see an animated graphical display showing the system’s antennas in Madrid, Spain, Goldstone, USA, and Canberra, Australia. Antennas that are transmitting and/or receiving signals are indicated by an up or down traveling wave graphic and a label above them indicating which mission(s) is communicating. Clicking the abbreviated name, such as MSL (Mars Science Laboratory aka the Curiosity Rover) or NHPC (New Horizons Pluto), and CAS (Cassini) brings up mission details. 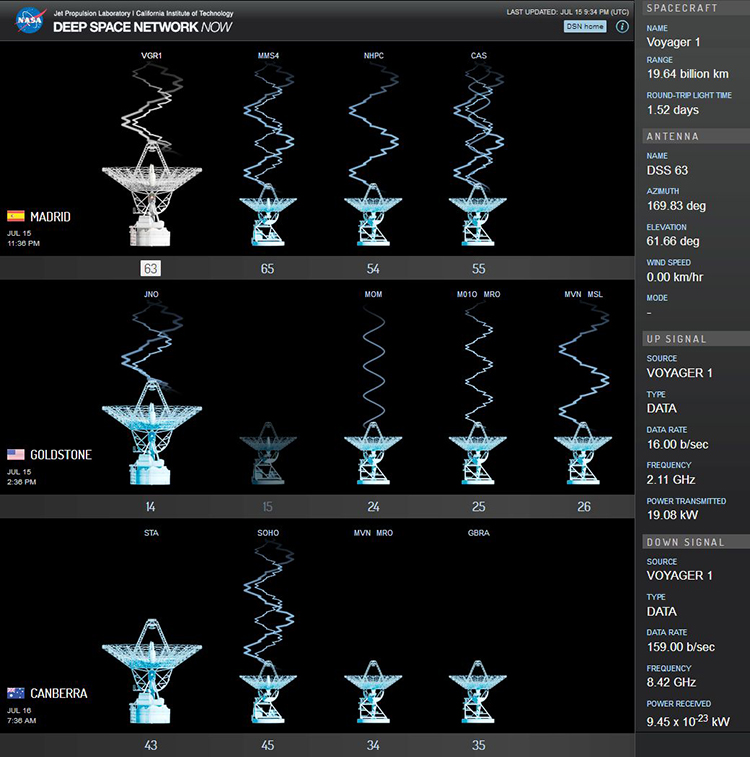 After Cassini’s EOM, we can expect plenty of new science to be published from future analysis the mission’s data. While no new missions are being planned for Saturn, we will have a tremendous legacy of images and discoveries from everyone’s favorite ringed planet. Right now, Saturn appears as a medium-bright yellowish object low in the southwestern sky after dusk. Between now and late November, it will slowly migrate towards the evening sunset’s glow. Over the next couple of months, find an opportunity to view Saturn in a backyard telescope and take a moment to consider what humans have accomplished out there. 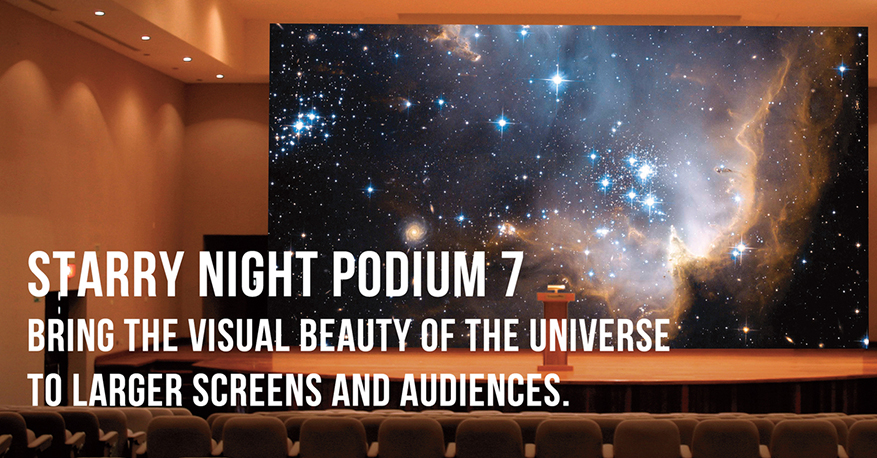 Optimized for projection, Starry Night Podium 7 provides an intuitively designed interface on the operator's computer screen and projects an impressive, uncluttered view of the sky that brings the visual beauty and accuracy of Starry Night to larger screens and audiences.

Starry Night is now available as a web-based application you can use over the internet with a web browser. It remains the best way to teach all your Astronomy and Space Science topics, but now without the need to install any CD’s, download any software, or worry about upgrades. With Starry Night Web you can access your favorite astronomy application from a desktop computer, tablet, or Chromebook.


The Layered Earth is now available as a web-based application you can use over the internet with a web browser. It remains the best way to teach your Earth Science topics, but now without the need to install any CD’s, download any software, or worry about upgrades. With The Layered Earth Web you can access your favorite Earth Science application from a desktop computer, tablet, or Chromebook. 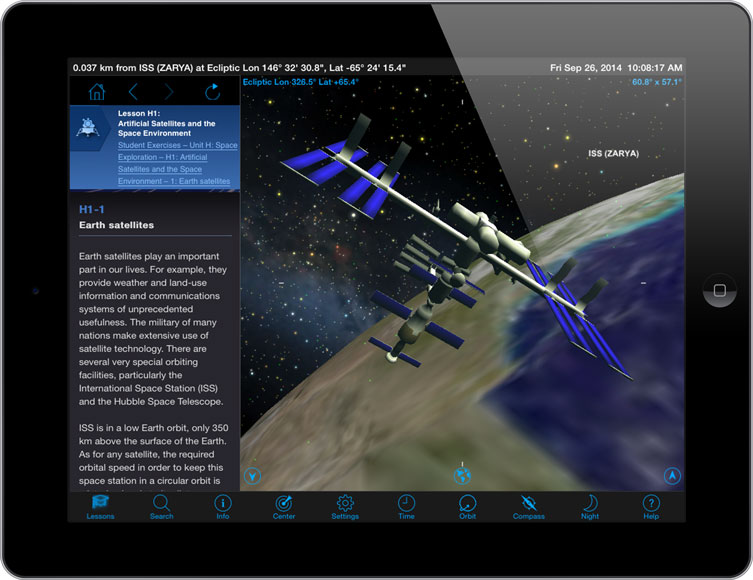 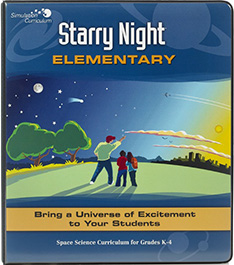 The pulse of the tides, the dance of the Moon and the swing of the seasons captivate even the youngest child. The realistic visualizations in Starry Night Elementary engage their natural fascination and guide them to understand the world on a scientific basis. With lesson plans and activities correlated to State and National standards, Starry Night Elementary for grades K-4 is the most effective way to introduce space science. 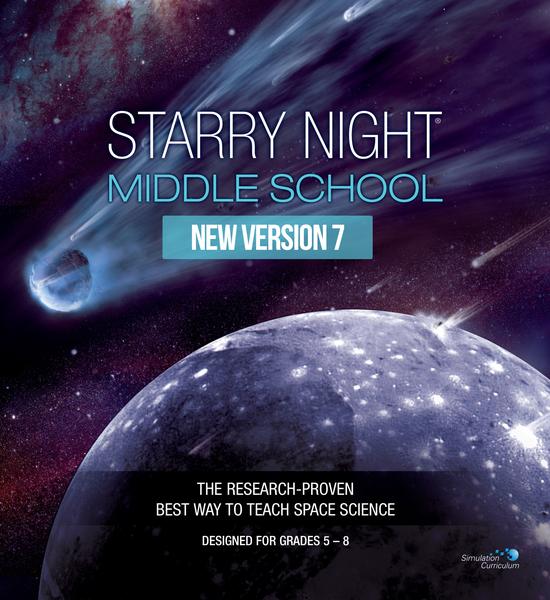 Award-winning Starry Night Middle School for grades 5-8 is the only space science curriculum that combines an interactive sky simulator, lesson plans correlated to state and national standards and extensive teacher resources in one easy-to-use package. 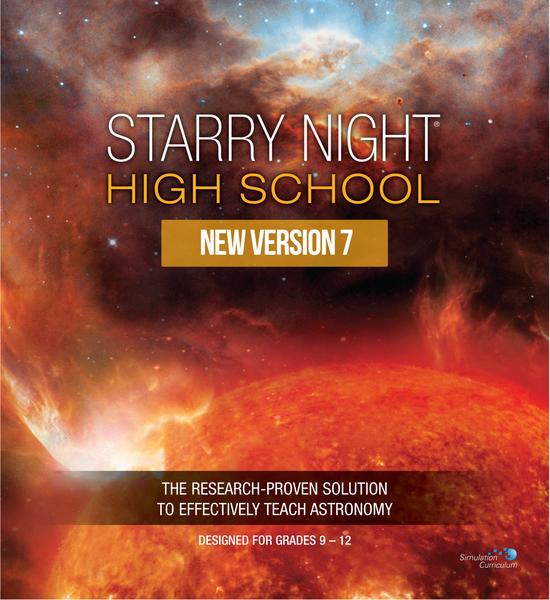 Starry Night High School for grades 9-12 is the only space science curriculum that combines an interactive sky simulator, lesson plans correlated to state and national standards and extensive teacher resources in one easy-to-use package.